Working at a Bar- a poem

Posted by Pinkjumpers in Life and all the rest

A Poem About a Boy’s Eyes

The boy with the lazy eye

I met you at summer school

Apart from your lazy eye.

Posted by Pinkjumpers in Life and all the rest

Too Much Diet Coke- a poem

This poem, if it was a film, would be prefaced, ‘based on true events.’

He is a druggie,
A bag of pot-
With six hours a day
To sit and smoke.

He drinks as well,
Ten beers a night-
This red-eyed goof
Of a bloke.

And one day he
Turns to me, with
Gawking mouth

Anna, my dear,
It must be said.
You drink too much
Of that Diet Coke.

I came home
to sharp green heads
peeping from the
dirty allotment of Time-
where I sank my sorrow
to rest.

Unattended fields
yield no crop-
but there is no mistaking
the colour that
betrays the brown
of my
abandoned mud.

My loss I cannot reap,
yet cannot leave to die!
I want it so badly
to revert into the ground
before that’s where I lie. 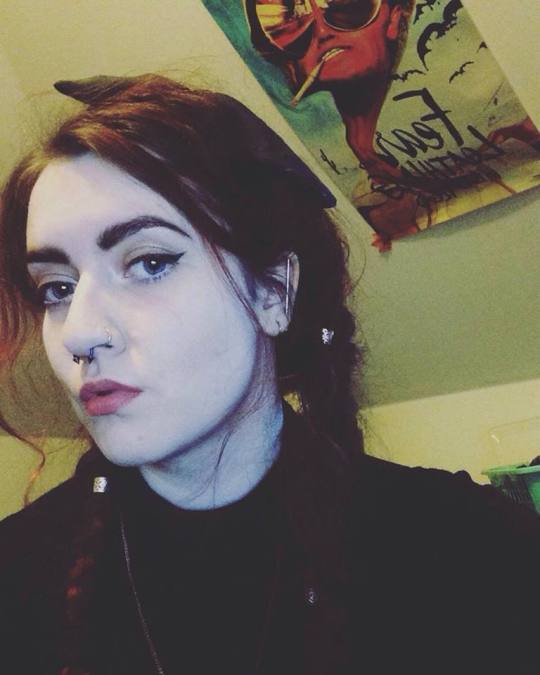 sexuality
allows violence we
don’t trust girls.
exist and get released to the public, it’s
enough.

a camera is presenting
ways to justify our interest in
whoever is committing these atrocities
even with that kind of truth.
Even in the face of truth.

she’s
a title bestowed by
flamboyant outfits, yells
she’s had a change of heart
she said to come
and make a lot of money

Ask her about violence and it’s complicated.
However, it is times like this when I’m
faced with my opinion I
need help. Violence is childhood.
That’s something that was done overnight.
It’s sad because she’s a victim, but he’s
a victim too.

Throwing up until I bled
felt good. (I had to get you
off my chest.)
A cry and a can of Coke
dilutes
the acid
which fastens my throat; scratched
from fingernails
that left behind
fine
red
lines;
soaked by the lemon
you kept in the back of your fridge.
(If lemons don’t go bad, why did it
turn brown?) 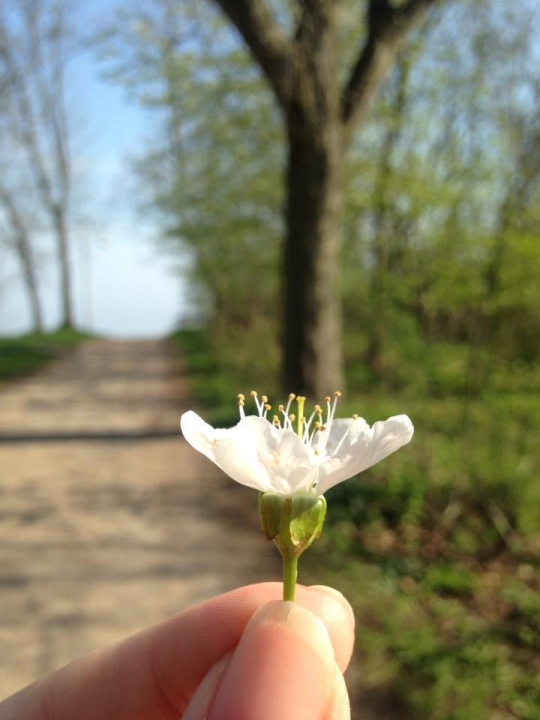 Posted by Pinkjumpers in Life and all the rest, Poetry Tags: Literature, love, poem, Poetry

Top 5 Differences between the UK and Canada

It has now been four months since I left England to study in Ontario. After asking if I have ever met the Queen, I will often be asked ‘so what is the biggest difference between Canada and the UK?’ It is a relatively simple question, yet I am still struggling to pinpoint the biggest difference as I mostly encounter lots of small -albeit merciless- disparities between our countries. Here I present a short list of just some of these differences.

#1 Crossing the Road
Feminists beware: if the thought of a white man telling you when you can and cannot cross the road sends a thousand patriarchal daggers down to the tips of your fingers, Canada might not be the place for you. It turns out our familiar friend the Green Man who has helped you cross the road since you were young enough to think jumping in front of a car might be a good idea; did not make it across the pond! Instead, Canadians rely on a slightly paler incarnation of our friendly road guide.

If you’re tired of being told whatever accent you managed to pick up in your years of living on English soil is unrefined and lacks all promise of sophistication, Canada may be the place for you. It turns out that I only had to travel 3500 miles for my Yorkshire accent to be heard as the Queen’s English and I never stop getting kicks from people telling me, for the first time in my entire life, that I sound elegant. However, from first hand experience I should warn the Brummies that even Canadians can sniff you out as sounding not entirely like the royal family- indeed,  you might have to travel a little further before you can hope to fool anyone!

In Canada, shopping for food genuinely feels like you’re purchasing your weekly groceries from an Odeon cinema. As well as that, just as you think six dollars for a bag of crisps was expensive, you are reminded as the bill is handed to you that tax is also added at the checkout. I have learnt to brace myself for the impending total of my groceries at Walmart as though I am about to find out that I have some obscure and incurable disease and one that usually means I wont be able to afford my Diet Coke fix for the next couple of days.

Ontario may be the only place in the entire world where you can walk from Dublin to Wellington in under five minutes. As far as road signs are concerned it’s almost impossible not to find yourself in places named after all corners of the globe. One memorable journey in particular took me from Pickering to Scarborough and finally to Perth where they were advertising their annual garlic festival. As a result of my ceaseless amusement, I can only be thankful that Canada does not appear to care a great deal when it comes to originality. 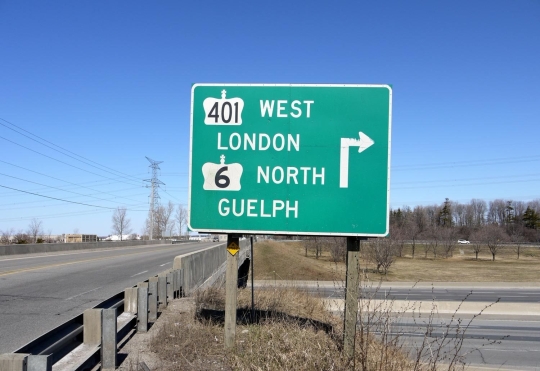 #5 You Live in a Petting Zoo

It wasn’t until I arrived in Ontario that I came to realise that black squirrels roamed the Earth- having only previously encountered the red and grey variety. Although my mother is insistent that the fluffy creatures look entirely evil, I think they are impossibly cute. Yet, if black squirrels don’t quite do it for you, there is no doubt that living in Canada will sooner or later enable you to become face to face with a plethora of exotic animals. Just the other week I was cooing over a family of raccoons that were scavenging my friend’s bins as he attempted to shoo them away. Just don’t tell your Canadian friends that you want to go hunting for beaver, however much you want to.

As I catch up with a dear friend from home and I tell her about the funeral I attended last week and the marriage proposal I received the week before that, she begins to laugh. ‘You always do things in such extremes Anna!’ I hadn’t, admittedly, thought about this. Although, as I was leaving the funeral service it did occur to me that this was not how I expected to spend any of my year abroad. Indeed, living in Canada has gone as smoothly as I expected it would, which is to say, not very smooth at all.

Though I have lived here for two entire months now, there are still a great deal of things I have yet to get my head around. Cars, in particular. My partner still takes sincere amusement every time I accidentally attempt to get into his car from the driver’s side, for example! Sometimes he strategically lures me by heading towards the passenger’s side, knowing it’ll throw me off. It always does. For the first few weeks I would oftentimes glance at cars on the road and immediate shock would fill my being as it appeared a ghost was occupying the vehicle. Of course, a quick glance to the left and I would remember that the driver was at the other side. The ‘wrong’ side, as I am still adamant. Roads are also a cesspool of confusion and eternal frustration. What English people would describe fondly as ‘zebra crossings’ are everywhere, although- as I have almost killed myself finding out- not all of them mean you can cross the road at your leisure. Some crossings are painted pink… I have no idea what this means. All I know is that I must annoy the shit out of drivers who can probably smell the wreak of me not knowing what the hell I am supposed to be doing. Bloody foreigners!

Living in Canada also feels like you are in some kind of permanent petting zoo; only, where petting may lead to a few bite marks. Oftentimes when I sit outside my residence, skunks will scurry over to me. They are adorable but I am told that I only think this because I have yet to discover the capabilities of their anal scent glands. (A Canadian said to me that it smells like urine and marijuana… so it is possible that a whiff would be more liable to remind me of my hometown than anything else!). I have learned that if you want to suss out foreigners, place a skunk near a group of people. The Canadians will run the other way and the rest of us will run towards it with a naive excitement over its cuteness. I also saw four raccoons one evening, a little family rooting around some bins. Again, my cotton-wool instincts were to run over and pet them as though they were stray kittens. ‘They’ll scratch your nose off, Anna!’

Although, even despite the array of exotic menageries, I often find myself feeling rather alone here. Sometimes I miss walking into bars and seeing faces I recognise. Sometimes I miss people that know me beyond the realm of ‘girl from England’. I also miss Yorkshire puddings.

Anna: [Upon seeing a building called Norfolk Manor] oooh! We should go there sometime!

After the university’s pep rally.